Local trailblazer Dr. Ruth Lawrence, pioneer of numerous child and maternal health fields, reflects on her career as she passes the torch.

“I lived out in the country…and so, my father had a shooting range,” said longtime newborn health expert Dr. Ruth Lawrence. “He made his own bullets, and I can remember sitting there, playing with droplets of lead… It would spread out and was beautiful. It was like a snowflake of lead.” She chuckled at the memory. “My sister and I would play with these all the time.”

Dr. Ruth Lawrence is arguably the nation’s senior leader in childhood poisoning. Her dedication to protecting young children led to many firsts in her career. She was the first woman to be accepted into Yale’s pre-med residency program in 1949. She was the Director of the first Poison Control Center in New York State, only the second center in the entire nation. She was the first doctor to head the University of Rochester’s newborn nursery. 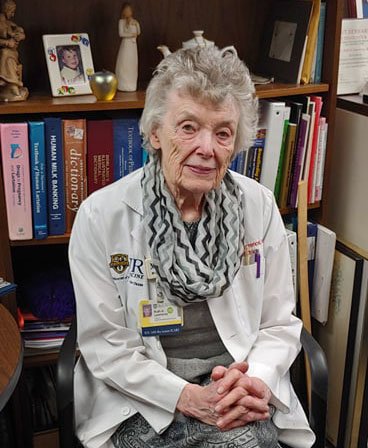 And she helped launch the first network of Children’s Environmental Health Centers in the state. Dr. Lawrence has been at the forefront of many medical fields – toxicology, neonatology and breastfeeding then, and environmental medicine now.

“It’s always been challenging. There were always people who were naysayers,” Dr. Lawrence said as she recalled the obstacles she faced. “I worked a lot with nurses. I was always grateful for the nursing staff, because the men were off being men.”

Dr. Lawrence has spent much of her career answering questions from the general public, particularly during her time as the Director of the Poison Control Center in the 60s. She fielded calls all hours of the day and night, often from worried mothers whose child may have ingested a toxic product.

“I was a mother and had children of my own. I understood their frantic dilemma,” she said. “I got calls in the middle of the night from reporters who would say ‘we have a story about such and such, tell us what you know.’” She helped advance the field of toxicology during a time when it was relatively new. “Talking [to the public] wasn’t the hard part. I was mainly concerned I had the right answer.”

Most recently in her career, Dr. Lawrence helped advance another new field through a unique statewide network of Children’s Environmental Health Centers, which informs healthcare providers and the public about environmental health concerns like mold, lead poisoning and indoor air quality.

With Dr. Lawrence as the Co-Director the past 3 years, the Finger Lakes Children’s Environmental Health Center (FLCEHC) has closely partnered with the Coalition to Prevent Lead Poisoning to reach the public. This partnership has led to thousands of families and community organizations in the Greater Rochester region being reached through educational materials, one-on-one trainings, and community coalition building.

Now, after a lengthy career helping moms and babies, Dr. Lawrence is stepping down from her role as FLCEHC Co-Director. Longtime CPLP member, and current Director of the Western New York Lead Resource Center, Dr. Stan Schaffer will serve as the new Co-Director for the time being. While she will no longer be at the helm of FLCEHC, she will continue giving guidance as an Advisor.

“Dr. Lawrence has been the principal instigator of a five-year NYS contract to amplify the efforts in our 15-county Finger Lakes region– with outreach efforts to the health of children, families and newborns being elevated,” said FLCEHC Co-Director Dr. Rich Miller. “She leaves the center in excellent condition… She has the magic to turn whatever she pursues into benefits for the health of children and families.”

After reflecting on her career, Dr. Lawrence had one piece of advice to our community: “Rochester has a much higher level of awareness. It’s very different than some other communities,” she said. “That gives us a certain responsibility. We have to live up to that by making sure everyone who lives here is kept safe.”

Family, friends and colleagues gathered together in January to celebrate Dr. Lawrence’s (pictured center) career as she transitioned to Professor Emeritus.

Are you a property owner in the City of Rochester? You could receive funding to address home lead hazards. LEARN MORE